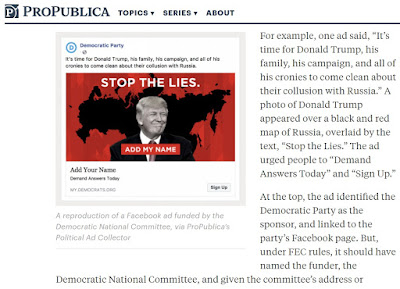 On December 17, 2017, Take Back Action Fund teamed up with the Campaign Legal Center to win a historic victory at the FEC to require Facebook to disclose who was paying for ads. After the publicity around Russian interference, one might assume other similar rulings would follow, but in fact, group after group has failed to win in front of the FEC - making our victory, unfortunately, the only one in the arena. This summer FEC Chairwoman Ellen Weintraub addressed this issue by stating, "Americans deserve transparency when it comes to internet communications, especially as
we face the growing threat of online disinformation campaigns and false political advertising.
The FEC needs to do its part to combat these threats and make it harder for foreign adversaries to
interfere in our elections with their influence operations. Better rules for internet ads are a small
but necessary step." Other calls for transparency were highlighted in her "Internet Ad Disclaimers Rulemaking Proposal".

On May 5, 2015, three months after launching Take Back Our Republic (Take Back), a non-partisan 501(c)3 organization (see details on www.takeback.org), the launch of www.takebackactionfund.org (a 501c4)  was announced for those who agreed advocate policies and implement specific solutions activities which go beyond the scope of the efforts of Take Back.